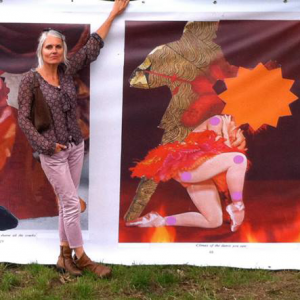 My practice is drawing-based; the impulse of the work is to challenge, resist and subvert cultural norms of female experience.

Alongside studio-based works on paper, the drawing extends to installation inside/on to buildings and structures, and large scale banners and billboards as public artworks. I like to exploit the transformative potential of the drawn image in outdoor space for its performative and participatory possibilities.

I use drawing for its directness and immediacy, for me, drawing is always ‘live’. Dynamic, autonomous female figures have always been prominent in my work: I have had privileged access to world-class dancers at English National Ballet and to the East London Strippers Collective. The contemporary visceral bodies of the strippers, pole dancers and Shibari performers I’ve drawn from life have much in common with the classically trained dancers – all make use of repetitive, ritualized, ‘codified’ gestures and are supremely self-confident in expressing themselves through the strengthened female body.

I also explore the illusory aspects of drawing, working directly on to found objects including spoons, shoes and gloves, symbolic objects of the feminine made into personal relics. I’m interested in how the ‘lifeless’ can seem to be made ‘live’.

I have often used the doll or mannequin as a metaphor for alienation or control – these objects are silently compliant but exert a vital presence in my work. They may also function as secular ‘i-dols’ – in that they are lifelike, yet lifeless, realistic yet unreal. I grew up with a fascination for the Germanic ‘Romantic Grotesque’ with its tradition of dolls as human substitutes in the literary imagination, where the dummy seems to reflect back to us the fallibility of the human condition.

I have over 20 years experience as a Fine Art educator, informed by my role as an artist and the diversity of my work experience including gallery based education and the particular challenge of prison education. I am Artist Workshop Leader with English National Ballet and Foundation Diploma Fine Art pathway leader at the City Lit in London.

Recent freelance projects include a Suffragette banner commission for ‘Procession’ a national mass-participation event as part of ’14-18 Now’, ‘Lines of Thought’ with The British Museum and ‘History of the Hoo Peninsula’ with the writer Rachel Lictenstein (Rodinsky’s Room, On Brick Lane). Public art commissions include ‘Mind Control Tower’ for Estuary 2016, Independent Free State’ as part of the cultural Olympiad 2012 and artist beach huts for the 60th anniversary of the Festival of Britain at the Southbank Centre.

I’m interested in risk and resourcefulness, trajectories rather than arrivals: a spirit of endeavour permeates my work and my life. I am well travelled, having made a number of long term solo trips through Asia and Central America and have lived and worked in France, The Virgin Islands and Taiwan. I have documented these experiences in two books: ‘Skin, Ribs and Hips’ and ‘Wanderlust: a Travel Sketchbook’.